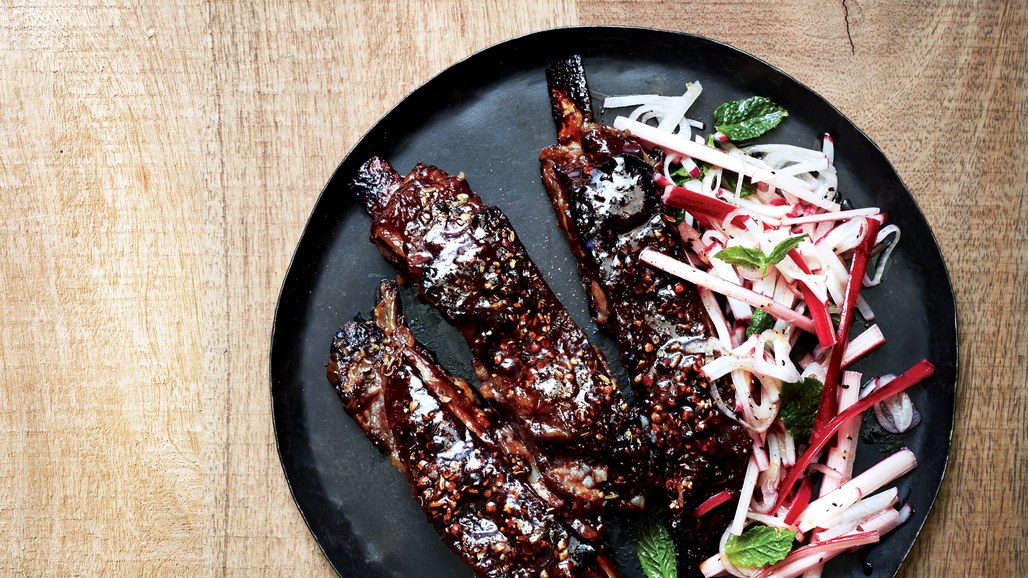 It’s crucial that you render as much fat as possible during the initial cooking for this recipe; you can even let the ribs cool and scrape off the excess before glazing. While the lamb ribs are cooking, start working on the vinaigrette for the radish salad.

Preheat oven to 300°. Toast black and white peppercorns and coriander and fennel seeds in a dry medium skillet over medium heat, shaking pan occasionally, until fragrant and seeds are golden, about 3 minutes. Let cool, then coarsely grind in a spice mill.

Generously season lamb with salt, then rub with spice mixture, pressing to adhere. Place bone side down on a wire rack set inside a rimmed baking sheet. Roast until ribs are browned and very tender and most of the fat has rendered, about 3 ½ hours (if ribs still look very fatty, roast 30 minutes more, tenting with foil if they look like they are in danger of burning).

While ribs are cooking, bring rhubarb, maple syrup, vinegar, and ½ cup water to a boil in a medium saucepan. Reduce heat to medium and simmer until liquid is reduced by half and syrupy, about 20 minutes. Strain through a fine-mesh sieve into a heatproof measuring cup, pressing on solids to extract as much liquid as possible; discard solids.

Remove ribs from oven and increase temperature to 450°. Carefully lift ribs onto a platter and remove rack from baking sheet. Pour off rendered fat and juices from baking sheet; discard. Set ribs on baking sheet and cut between bones with a paring knife or kitchen shears to separate. Drizzle some rhubarb glaze over ribs, taking care not to dislodge spices.

Add radishes, rhubarb, shallot, and mint to bowl and toss to coat. Taste and season with salt and pepper.

Serve ribs drizzled with any remaining rhubarb glaze with radish-rhubarb salad alongside.

Do Ahead: Ribs can be roasted (but not glazed) 3 days ahead. Let cool; cover and chill.