Skip to content
All Recipes >  Vanilla-Roasted Rhubarb and Strawberries 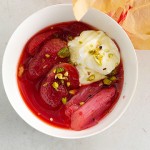 Combine rhubarb, strawberries, bourbon, and sugar in a medium bowl. Scrape in seeds from vanilla bean. Cut bean into 4 pieces and add to bowl; stir mixture until sugar begins to dissolve.

Place four 16×12″ sheets of parchment paper, or heavy-duty foil if grilling, on a work surface. Divide mixture evenly among sheets, arranging on one side of each sheet. Fold parchment over mixture and crimp edges tightly to form a sealed packet. DO AHEAD: Foil packets can be made 4 hours ahead; parchment packets should not be made ahead. Chill. Let stand at room temperature for 15 minutes before continuing.

Preheat oven to 425°F. Place packets on a small rimmed baking sheet. Alternatively, build a medium fire in a charcoal grill, or heat a gas grill to medium-high. Bake or grill packets until rhubarb is tender but not mushy (carefully open 1 packet to check; steam will escape), 10-12 minutes for thinner rhubarb, 14-16 minutes for thicker. Carefully cut open packets. Transfer mixture to bowls. Top with yogurt, honey, and pistachios.